I have just created an API 23 emulator on my machine:

I tried it successfully with a few apps of my own. But each time I try an application that uses a WebView as a UI, the app crashes that way: 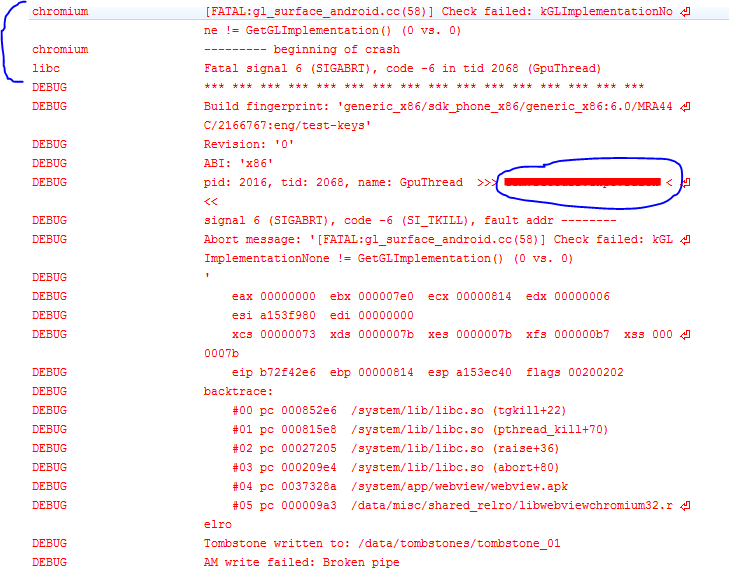 The three first line of this logcat are the only pertaining to my app (highlighted in blue). All other lines do not mention my application package’s name in the ‘Application’ column of LogCat, but one does in the middle of the message (circled in blue).

I can load the HTML code into the WebView. The crash occurs at setContentView(theWebView) time:

Using or not using runOnUiThread() to run mWebview.loadDataWithBaseURL() produces exactly the same result, which is expected as onCreate() is actually on the UI thread.

The html code I am using does not change anything. In the case above, the HTML_CODE variable contains this:

The app runs perfectly, even with a more advanced HTML+CSS+JS+JS<->Java binding code on all the API 17 and 19 devices and emulators I tried. This is where I’m puzzled. I didn’t have a chance to try with an actual Android 6.0 (API 23) device though.

The problem still occurs but the log is different, and a bit clearer. There is a ClassNotFoundException I cannot explain:

Any idea? (I’m investigating further so I will update this post should I find anything relevant)

This behaviour was not caused by any erroneous setting of the AVD or any missing prerequisite (harware, etc…).

As cryptojuice mentioned in comments this was caused by an OpenGL ES prerequisite issue on emulator side:

Unfortunately OpenGL ES 2.0 support has been mandatory for devices since at least Android 4.0, so we haven’t ever explicitly supported GLES 1.x at all and it was only working before by accident :/

It seems a bit problematic that the emulator (without host GPU emulation) doesn’t meet the minimum requirements for Android devices.

We might be able to work around this for the emulator at a significant performance cost; we’re talking to the emulator team about what the best thing to do here is.